Over ten hours of 14 films and shorts in this superb 3 DVD Box Set with many of the films previously considered ‘lost’ now making their first appearance on DVD.

THEATRE ROYAL (1943)
Stars: Flanagan & Allen, Peggy Dexter and Finlay Currie. Directed by John Baxter.
A manager of a theatre is broke, but rather than let the theatre close and fall into a rivals hands, the staff put on a show to raise the funds to keep it open!

A LITTLE OF WHAT YOU FANCY (1968)
A loving tribute to Music Hall and the likes of Gus Elen, Lily Morris and Ella Shields. Helen Shapiro sings The Boy I Love is Up in the Gallery and the original music hall stars appear on archival footage. Directed by: Robert Webb.

SARAH REMEMBERS (1952)
A film by Wilf Watters which features the recollections of an elderly resident of Hoxton, from the bombings and the changes that are happening to the area and personal memories of The Hoxton Music Hall.

THE FINAL FINALE (1968)
Filmed by Wilf Watters, we follow the demolition of one of London’s greatest Music Halls, The Bedford Theatre, which played host to many of Britain’s finest acts. We have unprecedented access around the site as we say a final farewell and witness the demolition.

SAY IT WITH FLOWERS (1934)
Stars Mary Clare, Ben Field and George Carney. Directed by John Baxter. When a market working couple fall on hard times, their colleagues put on a benefit concert to help them, which feature Charles (The Man Who Broke the Bank at Monte Carlo) Coborn, Florrie (Has Anybody Here Seen Kelly?) Forde and musical comedy star Marie Kendall – grandmother of Kay Kendall.

CAVALCADE OF VARIETY (1940)
Directed by Thomas Bentley. Peter Brough and Archie Andrews present a variety bill that includes Billy Cotton and his Band, Eve Becke, The Four Air Aces, Bobbie ‘Uke’ Henshaw and Sam Barton. Also on the bill are The Sherman Fisher Girls, The Radio Three, The Arnaut Brothers and The Empire Girls.

MUSIC HALL GREATS: TELL ME ANOTHER
Part (1) Features Norman Wisdom, Charlie Drake, Roy Castle and more as they share memories of how their careers began in the music halls.
Part (2) Billy Dainty, Dickie Henderson, Tommy Trinder and Reg Varney tell us about the jobs they did before show business and their early career in the theatres. 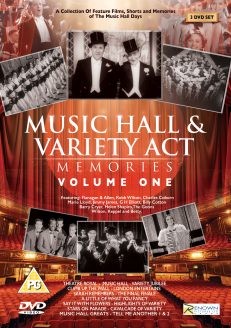