View cart “My Brother’s Keeper DVD” has been added to your cart.

George Martin (Jack Warner) and Willie Stannard (George Cole) are two prisoners being transported to prison handcuffed together. Martin is a hardened, cynical career criminal, while Stannard is a naïve, rather dull-witted youth who maintains his innocence. During the journey the pair manage to escape. Initially Martin steals an army corporal’s uniform and passes Stannard off as a deserter in his charge. With the help of Martin’s former mistress Nora Lawrence (Jane Hylton), who runs a nearby garage, the pair shelter and remove the handcuffs that have bound them. Going separate ways, the criminals must avoid capture by the Police and evade the press pack led by Ronnie Waring (David Tomlinson) who are hunting for the escapees. 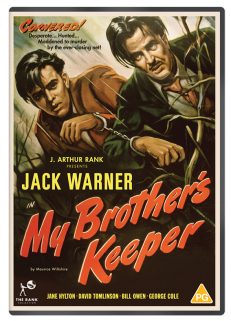