This release contains every remaining episode of Mystery and Imagination and brings together all six of the feature-length teleplays produced by Thames Television between 1968 and 1970 alongside the two remaining ABC-produced episodes from 1966.

The Fall of the House of Usher and The Open Door – the two remaining complete episodes produced by ABC in 1966 (Disc Four). An extract from Casting the Runes – all that exists from this 1968 ABC episode (Disc Four). Extensive image gallery (Disc One). Episode guide booklet by Archive TV historian Andrew Pixley. 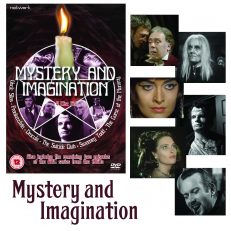