View cart “New Biography: The Real Peter Sellers” has been added to your cart.

Throughout the world, people regard Peter Sellers CBE as a comedy genius, one of the greatest ever. However, he always seemed to be acting, even in interviews. So, who was Peter Sellers? He once said, ‘I could never be myself you see. There is no “Me”. I do not exist. There used to be me, but I had it surgically removed’. Clearly, this was not intended to be taken literally; but somehow, he had lost his sense of identity. The real Peter Sellers was a celebrity with a succession of beautiful wives; immense wealth; magnificent motor cars; expensive yachts; a house in Mayfair and various palatial residences. However, he was plagued by self-doubt; ambitious, but never satisfied, he turned to alcohol and drugs to get him through the day. As an actor, he so thoroughly inhabited the character he was playing that he became that person, so it became difficult to tell, who was the real Peter Sellers? 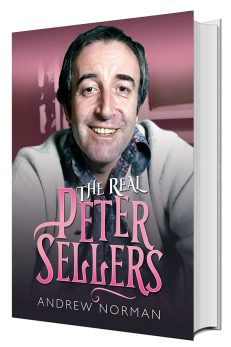