A deadly plague is ravaging the Earth. Flash Gordon learns that Ming the Merciless is behind it. With Dr. Alexis Zarkov and Dale Arden, he travels to the planet Mongo to find a cure. An antidote is discovered, but Ming captures Zarkov and Dale. Flash returns to Earth with the antidote, then returns to Mongo to free them, eventually ending Ming’s reign. Prince Barin takes his rightful place as the ruler of Mongo. Ming’s last words to Flash are “I am the universe!” Zarkov replies that with Ming’s death “Flash Gordon has conquered the universe”.

THE PURPLE DEATH (1940) A plague called the Purple Death is sweeping across Earth. Ming the Merciless is behind the plague, using spaceships to spread “Death Dust” in the Earth’s atmosphere.

FREEZING TORTURE (1940) As the others flee the Power Room, Flash is caught in a struggle with a giant.

THE DESTROYING RAY (1940) Captain Torch activates the detonation control and insists he must dispose of Flash.

FLAMING DEATH (1940) Emperor Ming sets out to destroy the forest kingdom of Arboria, where Flash and his friends have landed.

THE LAND OF THE DEAD (1940) Flash encounters the menacing Rock men, a primitive race that lives in caves; plus a time bomb planted by soldiers.

THE FIERY ABYSS (1940) Flash and Zarkov escape the Rock men, but soon find themselves helping in the search for the Rock King’s missing son…

THE POOL OF PERIL (1940) The action is non-stop as Flash rescues the Rock Prince from certain doom – and then battles Ming’s soldiers.

THE DEATH MIST (1940) As Emperor Ming’s bombers close in on Prince Barin’s palace, Flash and Dale do battle with Ming’s top agents.

STARK TREACHERY (1940) The conniving Ming has plans to make Dale his bride, but there will be no royal wedding if Flash can get there first!

DOOM OF THE DICTATOR (1940) Flash and his comrades wage all out war against Ming to rescue Dale and Dr Zarkov. 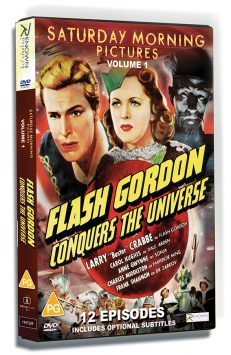