The Green Hornet Strikes Again! was a 15 chapter 1941 movie serial, based on The Green Hornet radio series. The plot follows wealthy publisher Britt Reid and his trusted Korean valet and sidekick Kato, who disguise themselves as crime-fighting vigilantes. Together, they battle the growing power of ruthless crime lord “Boss” Crogan and his rackets and henchmen across the city. Unknown to them, Crogan also has strong ties to foreign powers unfriendly to America. Cast: Warren Hull as Britt Reid and his alter ego The Green Hornet. Keye Luke as Kato, the Green Hornet’s sidekick.

The Green Hornet was directed by Ford Beebe and John Rawlins. Ford Beebe specialized in B-movies, Westerns and action serials, including Buck Rogers and Flash Gordon. He said that westerns were the “bread and butter” of film studios and directed over 100 films in a career that stretched from 1916 to 1952. Alfred Hitchcock commended Beebe for his 1942 film Night Monster. John Rawlins directed 44 films between 1932 and 1958, having entered films during the silent era as a stuntman and bit player. A master of swift exposition and fast action, his biggest success was the 1942 Arabian Nights, the first film made in 3-strip Technicolor and a huge hit for Universal Pictures.

Disc One: Flaming Havoc; The Plunge of Peril; The Avenging Heavens; A Night of Terror; Shattering Doom; The Fatal Flash; Death in the Clouds; Human Targets; Tragic Crash; Blazing Fury. 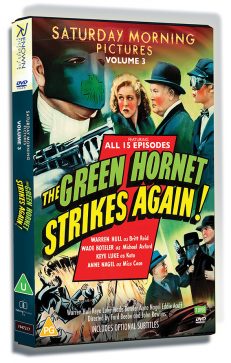