View cart “THE PHANTOM CREEPS PULL-UP SCARF” has been added to your cart.

The Phantom Creeps is a 12 chapter science fiction horror serial made in 1939. It stars Bela Lugosi as mad scientist Doctor Zorka, who attempts to rule the world by creating various inventions, including a belt which renders him invisible; an eight-foot tall slave robot and robot spiders that can destroy life. Foreign and US agents try to seize the inventions for themselves, so Zorka moves his lab. However, his beloved wife is killed and Zorka swears eternal vengeance against anyone trying to use his creations and to make himself world dictator. The series star, Bela Lugosi, portrayed Count Dracula in the 1931 film, Ygor in Son of Frankenstein (1939) and played many roles in horror films from 1931 to 1956. Robert Kent plays Capt. Bob West. He starred in several film serials of the 1940s including The Phantom Rider and films including Dimples (1936), Charlie Chan at Monte Carlo (1937) and Blonde Comet (1941). Dorothy Arnold was an American film actress contracted to Universal Studios and the first wife of baseball star Joe DiMaggio. She starred in The House of Fear in 1939 and appeared in film and on TV from the 30s to the 50s. Ed Wolff, a 7’′4” tall actor, was a circus giant before his film career, which included The Phantom of the Opera (1925) and Invaders from Mars (1953).

The Menacing Power
Rogue scientist Dr Zorka attempts to rule the world with his sophisticated inventions.

Death Stalks the Highways
Dr Zorka swears to take revenge against society, having discovered new forces with which to create weapons.

Invisible Terror
Mallory makes a discovery about the source of Dr Zorka’s power, creating trouble for the doctor.

Thundering Rails
Dr Zorka is determined to recover his meteorite.

The Menacing Mist
Dr Zorka’s laboratory is raided by the Secret Service.

Trapped in the Flames
Dr Zorka’s enemies are in trouble, as he plans to turn his giant robot against them.

Speeding Doom
Dr Zorka is pursued by spies, as he continues to elude the authorities.

Phantom Footprints
Circumstances change, leading Dr Zorka and West to hunt down the spies themselves.

The Blast
Dr Zorka makes use of his ability to turn himself invisible to extract himself from a dangerous situation.

To Destroy the World
Dr Zorka’s laboratory is under threat from the Army, will he be able to save his inventions? 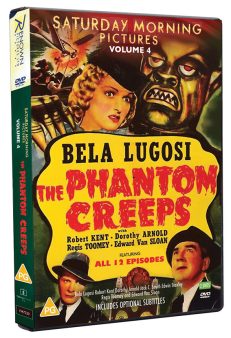