A Rainy Afternoon at the Flicks Volume Two

Recreating a good old-fashioned afternoon at the Flicks, with a short, a main feature, vintage adverts and the national anthem at the end! Highlights include a young Robert Morley in You Will Remember, Nyree Dawn Porter in her first film role and “Britain’s secret weapon” the delightful Chrystabel Leighton-Porter in The Adventures of Jane! Three DVD collection with optional subtitles.

An intriguing spy thriller in which the hero agrees to act as decoy.

A young social worker imagines himself in Biblical times, meeting Jesus, and realises that the Holy Spirit is with him.

Come to London Zoo! A short promotional film made in the 1940s.

Based on the life of popular English composer Leslie Stuart, this musical biography follows his career in the British music halls.

One a Minute Made in the 1940s, this previously lost short looks at Gordon’s ‘wonderful’ inventions.

A feisty girl is led astray; first by her gold-digging mother, and then by a local con artist Denny. (AKA Tough Girl)

British drama about a journalist who, after trying to warn the public of the dangers of Nazism, moves to a haunted lighthouse. 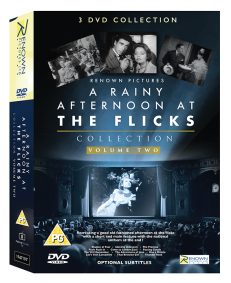