A film by Tony Richardson

Directed by Tony Richardson, (Tom Jones, The Charge of the Light Brigade, The Entertainer, A Taste of Honey), and featuring a powerful central performance from Jeanne Moreau, Mademoiselle is a mesmerising psychological drama – an artistic and disturbing exploration of the darkest of carnal desires.

Extras: Newly recorded audio commentary by Adrian Martin, Doll’s Eye (1982, 75 mins): a rare and previously un-released BFI Production Board film directed by Jan Worth examining contradictory male attitudes to women including a researcher, a prostitute and a switchboard operator.
An interview with Keith Skinner (2020): the actor and historian discusses his work on Mademoiselle.
Illustrated booklet with new writing on the film by Jon Dear and Neil Young, also includes writing on Jean Genet by Jane Giles and an essay by Jan Worth on Doll’s Eye.
Image gallery, original theatrical trailer. 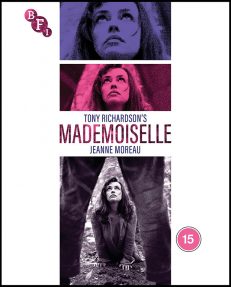