No Lady (1931)
Stars: Lupino Lane, Renee Clama, Sari Maritza
Lupino Lane Comedy vehicle, where Lupino Lane directs and stars as henpecked Mr Pog, who takes his wife and stepchildren on holiday to Blackpool.. He is mistaken for an international criminal mastermind and drawn into a series of adventures that climaxes in a glider race which a foreign power aims to win by fair means or foul. Lovely shots of 1930`s Blackpool.

Her First Affaire (1932)
Stars: Ida Lupino, George Curzon, Diana Napier
Ida Lupino stars in her first film aged just 18 and plays an impetuous teenager, who, much to the consternation of her boyfriend (Arnold Riches), becomes infatuated with a famous novelist (George Curzon). The boyfriend and the writers wife (Diana Napier) join forces to deter her, and he decides an early marriage is the best cure.

Shipmates O`Mine (1936)
Stars: John Garrick, Jean Adrienne, Wallace Lupino
A through the years story with songs and sentiments. A sailor rises from first officer to captain, gets married and has a son, but loses his command when his ship is rammed and he abandons ship to save passengers. For years he lives in the countryside. Then his son, now grown, contacts his father`s old shipmates and eventually their ship is put back into commission with its old skipper in command. 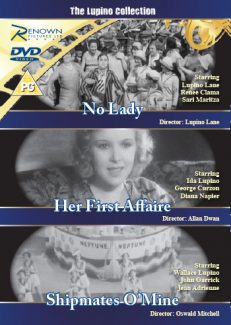