View cart “ROGER MOORE: His Films and Career HARDBACK BOOK” has been added to your cart.

Our Eric – A Tribute To Eric Portman- New Book Release

A Tribute to Eric Portman

The first ever biography of British film star and stage actor Eric Portman (1901-1969), who appeared in over 40 films and around 100 stage plays.

This revealing book includes much original information about Eric Portman’s childhood, family, career and private life. Including contributions from people who knew Eric, including nephews, cousins, friends, neighbours, colleagues, acquaintances and fans. The book also includes many previously unseen photographs and other illustrations, plus private family documents and letters.

During the 1940s and 1950s Portman was one of the biggest stars of British cinema, ranking alongside other greats such as John Mills and Trevor Howard. His 30-year screen career includes: One of Our Aircraft is Missing, 49th Parallel, A Canterbury Tale, Daybreak, The Colditz Story, Millions Like Us, His Excellency, We Dive at Dawn, The Good Companions and The Naked Edge. He evolved from support to leading man to character star, but he never forgot his Halifax roots. 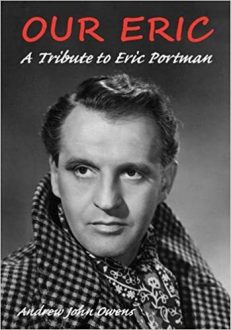