OUT OF THIS WORLD

OUT OF THIS WORLD

An offshoot from the legendary Armchair Theatre, Out of this World was devised in 1962 by television colossus Sydney Newman (Doctor Who, The Avengers) and Irene Shubik (The Wednesday Play, Rumpole of the Bailey) to present the science fiction genre at its intelligent best to an adult audience.

The anthology series was produced by Leonard White, dramatising the cream of literary science fiction, from such writers as Isaac Asimov, Clifford Simak and Philip K. Dick, using the considerable scriptwriting talents of Clive Exton, Leon Griffiths and Terry Nation. The show was a tremendous success, paving the way for Irene Shubik’s later classic series Out of the Unknown. Hosted by actor Boris Karloff, each episode explored the genre from satire to suspense, drama to comedy, with the greatest flair and invention that Sixties television could provide.

This long awaited release presents the only surviving episode, an adaptation of Isaac Asimov’s Little Lost Robot, with Maxine Audley as the formidable “robopsychologist” Susan Calvin.  In 2019 robots cater to every human need, following the “prime directive” not to harm humans. When a robot that’s been deprogrammed to disregard the directive gets lost amid identical machines, a “robopsychologist” is employed to try and identify it.
Director: Guy Verney Cast: Boris Karloff, Maxine Audley, Clifford Evans, Murray Hayne, Gerald Flood, Hayden Jones, Roger Snowdon. 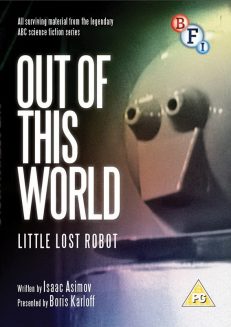