OUT OF TOWN Volume 2 with JACK HARGREAVES

OUT OF TOWN Volume 2
with JACK HARGREAVES

• Living With a Dog
• A Yorkshire Childhood
• The Ocean Racers
• Four LPs that Jack Hargreaves made in the 1970s: Know Your Fish, Know Your Dog, Know Your Pony and Country Walking.

Jack Hargreaves explored rural life in Britain, reflecting on its character, traditions, history and folklore; and the skills that had passed through generations. With his experience, knowledge and love of the countryside, Hargreaves’ easygoing presentation style enthralled both rural and urban viewers. The series was so popular it ran for over two decades. An unsentimental record of a bygone time, it set the bar high for all “country matters” series that were to follow. This volume contains the 28 editions made in the mid-1980s which combined original Southern Television film materials alongside new material recorded in Jack’s famous shed!

These compilation programmes were made in 1986 by Jack Hargreaves, who revisited the original Southern Out of Town film stock. While several of the location films on this set can be seen in volume one, they are presented here with different “shed” introductions and newer commentaries from Jack. In 1972, Jack, who was always keen to use different media to present information to his audience, recorded Know Your Fish on a vinyl LP. In 1977 he recorded three more LPs based on popular themes from Out of Town on television: Know Your Dog, Know Your Pony and Country Walking. This second volume presents those four sound recordings in their entirety.

Also included: Living With a Dog
Jack Hargreaves narrates and appears in this information film about dogs and their long association with man.

A Yorkshire Childhood (7 November 1980)
A look at Jack’s early influences, shot on location in 1980 to celebrate his twenty-one years of continuous broadcasting on Southern.

The Ocean Racers (10 August 1966)
A Southern Television documentary which follows the Zulu as she competes in the 1965 Fastnet Race. PDF material relating to this programme is included on disc five.

Jack Hargreaves OBE is remembered for appearing on How, a children’s programme about how things worked, which he conceived. His weekly magazine programme Out of Town was first broadcast in 1960 following the success of his series Gone Fishing. With a relaxed and amiable style, he offered viewers a fascinating insight into the ways of rural life of years gone by, as well as the dwindling traditions and values of the people who inhabited a world devoid of technology and who gratefully distanced themselves from the rat-race of modern life. In the introduction to his biography, Hargreaves wrote: “…I was asked to do a few television programmes about the old agrarian life. I had little hope for them because I believed people had become uninterested in the past.  Anyway, the past crept up closer behind us. In 1986 the BBC, celebrating one of its customary anniversaries, put on a programme which was billed as a ‘period gem’. It was made in 1965. However, to my unending surprise, the Out of Town programmes went on for twenty-five years. I received and answered thousands of letters and met many more thousands of people, young, middle-aged and elderly. I learned that most of them in all generations think that something has gone seriously wrong with the world but can’t work out what.  And I learned that for many of them the life I lived while I was growing up has become a desirable dream … the feeling of the old, small-farming life and the know-how of it.” The series was an instant hit as viewers tuned in each week to get a taste of rural life and a quickly disappearing world. By the late 1970s the English countryside had lost an area twice the size of Berkshire to urban development. “The only way to save the countryside”, said Jack “is to show people exactly what happens in it.” Out of Town presents a complete picture of country life in all its aspects. It is not a programme solely about fishing, nature or gardening, but all of these things as they affect the countryman. It remains a precious record of rural life in Britain, a nostalgic view of rural history told in a matter of fact and practical style by a man who truly understood the ways of the countryside. 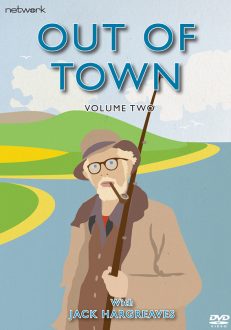 You're viewing: OUT OF TOWN Volume 2 with JACK HARGREAVES £25.00
Add to cart