OUT The Complete Series Special Edition

OUT The Complete Series Special Edition

Frank Ross did the crime and as a consequence did the time but now he’s out! Bank robbing was his forte but he would never have been caught had someone not grassed him up. After eight years inside, courtesy of Her Majesty, he is determined to uncover the snitch and he will stop at nothing to unearth the secret – something that certain people in the criminal underworld will do anything to protect. On top of this his wife has a mental health condition and his son is becoming delinquent.

Welcome to the world of Frank Ross. Pursued by both police and criminals, can he uncover the truth before the clock stops ticking and he wakes up with a chalk line around himself?

• All six of Trevor Preston’s scripts in PDF format.

OUT can be seen on Talking Pictures TV on Saturdays at midnight.
Written by Trevor Preston and directed by Jim Goddard, OUT was produced by Thames Television and first aired in 1978. The series was hugely popular with an average audience of 10 million viewers.  OUT is dominated by Tom Bell’s iconic portrayal of Frank Ross. His immaculate three-piece suit and imposing look mark him out as a sharp individual, in more ways than one. His gang included John Junkin, Frank Mills, Oscar James and Peter Blake. Other notable actors were Norman Rodway (as Inspector Bryce, who put Ross away), Brian Croucher (Frank’s only real friend), Andrew Paul as his son Paul; Linda Robson as Paul’s girlfriend Mo, Brian Cox (as gangland rival McGrath) and Derrick O’Connor and Bryan Marshall (two of McGrath’s heavies). At the time of the series, graffiti saying, “Frank Ross is innocent” appeared in various London locations. When a rail strike disrupted people’s plans to make it home in time for the final episode, the words: “who grassed Frank Ross?” could be seen scrawled across blackboards at Euston station. 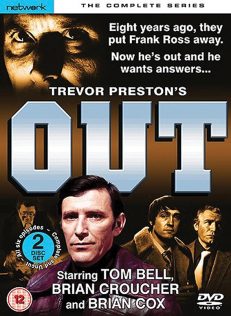 You're viewing: OUT The Complete Series Special Edition £15.00
Read more