View cart “Paperback Book: BRITAIN’S FORGOTTEN FILM FACTORY The Story of Isleworth Studios” has been added to your cart.

From the first Sherlock Holmes film to the African Queen, the only full account of this important film studio. This book provides an insight into the British film industry from 1914 to 1952; and includes a host of famous names, such as Buster Keaton, Richard Burton, Humphrey Bogart & Katharine Hepburn.

The story of Isleworth Studios is essentially that of the British film industry from 1914 to 1952. Beginning with the first British Sherlock Holmes screen adaptation and ending with its Oscar-winning swansong, the African Queen, it was one of the most technically advanced studios in the country and home to some of the best and the worst examples of British cinema.

Isleworth experienced the transition from silent films to talkies. Alexander Korda arrived, looking to rival Hollywood, followed by Douglas Fairbanks Jr looking to rival Korda. Richard Burton made his screen debut and Bogart, Hepburn and Huston made a classic. Little by little the old dream factory is now crumbling. Isleworth Studios has a worthy history in the annals of the British film industry. This is its story, told for the very first time. 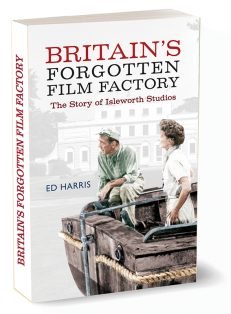