This fully authorised biography is the result of five years of research by author Tony Dalton, a friend of Terence Fisher and his family and includes an introduction written by Fisher’s daughter, Micky Harding.

Terence Fisher is a name Talking Pictures TV viewers will be very familiar with seeing on screen. Fisher was born in Maida Vale, a district of London. He left school aged 16 and served in the Merchant Navy for five years. He first broke into the film industry as a clapper boy at Lime Grove Studios in Shepherd’s Bush in 1933. Although people celebrate his Hammer career, he also directed many TPTV favourites, Portrait from Life (1948) with Mai Zetterling; Marry Me! (1949) with Derek Bond; The Astonished Heart (1950) with Noël Coward (replacing Michael Redgrave during filming); So Long at the Fair (1950) with Dirk Bogarde and Jean Simmons. Fisher returned to supporting features with Home to Danger (1951) for Eros Films. He made Final Appointment (1954) outside Hammer with John Bentley then went back to Hammer for Mask of Dust (1954) with Richard Conte. He made the comedy Children Galore (1955) and the Final Appointment sequel Stolen Assignment (1955). Next came another movie with Bentley, The Flaw (1955) before he made two crime films, The Gelignite Gang (1956) and The Last Man to Hang? (1956). He was hired by Tempean Films to make a final crime thriller with an American star, Kill Me Tomorrow (1957) with Pat O’Brien. 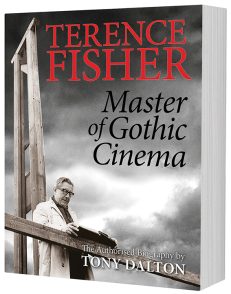