View cart “The Smallest Show on Earth – A Celebration of the Projectionist – Book and DVD” has been added to your cart.

Paperback Book: Too NAKED for the NAZIS: The True Story of Wilson, Keppel & Betty

Paperback Book: Too NAKED for the NAZIS

A biography by Alan Stafford

Wilson, Keppel and Betty were the epitome of the bizarre speciality act, shuffling through silver sands during the golden era of British variety. They inspired Morecambe and Wise, Legs & Co and the Chuckle Brothers. But what do we know about the Englishman and Irishman who clog-danced around America, returned home with two fezzes and a Cleopatra from Kansas, and proceeded to walk like three Egyptians?

This lovingly pieced together story of their lives reveals for the first time the flirtatious Irish dandy with the dicky ticker, the scruffy Liverpudlian party animal; and the teenage
tearaway turned tap-shoed temptress who became a war reporter. Their dancing outraged Hermann Goering; years later, in Nuremberg, Goering performed while Betty wrote the reviews. 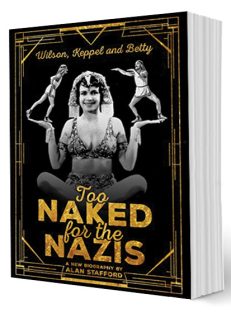 You're viewing: Paperback Book: Too NAKED for the NAZIS: The True Story of Wilson, Keppel & Betty £14.99
Add to cart