A superior sexploitation thriller showcasing fiery performances from both Herbert Lom (as a sinister pimp) and Diana Dors (as one of his workers), Passport to Shame was the feature directorial debut for BAFTA-nominated Alvin Rakoff. With camerawork from Nicolas Roeg and a memorable performance from Odile Versois as the innocent caught up in a life of crime, it is presented here as a remaster from original film elements in its original theatrical aspect ratio.

A young French girl on the run from the Parisian police, arrives in London. Believing herself to be safe, she is horrified to discover that Nick – a violent, scheming pimp – has designs on making her the latest acquisition to his “girls of the night”… 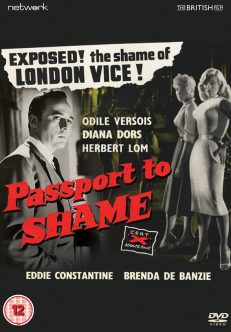