A comic actor who first came to attention on the popular radio series The Goon Show, Peter Sellers CBE remains one of this century’s most acclaimed comedy stars. Graduating from radio and TV to the big screen, Sellers demonstrated a gift for character transformation. The three films in this exclusive box set are from the late 50s /early 60s period of Sellers’ career, before he became an international star as Inspector Clouseau. I’M ALL RIGHT, JACK (1959) won Sellers a BAFTA for Best Actor as the trades union shop steward Fred Kite. ONLY TWO CAN PLAY (1962) sees Sellers as John Lewis, a bored librarian tempted by the wife of a local councillor – risky stuff in a small Welsh Valley town! Finally HEAVENS ABOVE! (1963), is a British comedy of manners in which Sellers’ socialist priest is sent to an upper-crust parish. The box-set is completed by a definitive collection of his best work: THE VERY BEST OF PETER SELLERS. 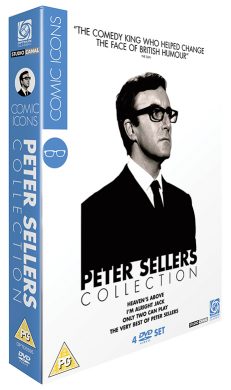