Just £20  for both with free UK Postage.

A landmark collection representing a unique discovery of 23 recordings made by Petula Clark CBE for various BBC Radio programmes between 1951 and 1961, including the long-running Calling All Forces in which Petula appeared as the resident featured artist. Almost all of the songs are unheard since their original transmission and this compilation ensures these historical broadcasts are not lost to history. Highlights include Rodgers and Hart’s With A Song In My Heart and Piaf’s While The Angelus Was Ringing (Les Trois Cloches), accompanied by Geraldo and his Orchestra with the George Mitchell Singers and Choir. Other standout selections include up-tempo covers of the Dean Martin and Line Renaud duet Relax-Ay-Voo and the Doris Day hit Ooh Bang Jiggilly Jang. There are live performances by Petula of her own hits Sailor and Suddenly There’s A Valley, and of the theme song to her 1952 film Made In Heaven, introduced by co-star David Tomlinson.

TRACKS: Good Luck, Good Health, God Bless You / Harbour Lights / While the Angelus Was Ringing / With a Song in My Heart / Till Then /
Down in the Glen / I’ll Make Up for Everything / My Choice / Far Away Places / My Happiness / Someone Like You / Autumn Leaves / Always / Made in Heaven / We’re a Couple of Swells (With Billy Ternent) / Relax-Ay-Voo / Suddenly There’s a Valley / Ooh Bang Jiggilly Jang / It’s Magic / Sailor / Dancing with Tears in My Eyes / Dancing in the Dark / Stardust (Bonus Track) / Ordinary People (With George Formby) (Bonus Track)

Don’t Ever Leave Me DVD

This Rank classic comedy stars Jimmy Hanley as a car salesman who accidentally becomes a kidnapper! When small-time crook Harry Denton, (Edward Rigby), is released from prison, he moves in with his grandson Jack and kidnaps Sheila, the daughter of a well-known actor, played
by Petula Clark. Harry gets more than he bargained for, as Sheila welcomes the adventure and the attention in the press! Her father realises that the publicity is boosting ticket sales at his ailing theatre so he is not keen to see his daughter returned too quickly. Meanwhile a friendship develops between Sheila and Jack, while his long-suffering girlfriend begins to suspect he has another woman! Clark’s twelth film role, in which
she sings: “It’s Not for the Want of Trying”. 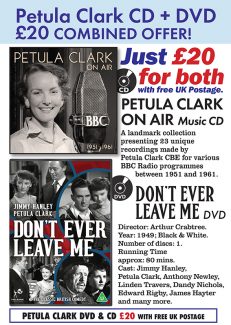