First broadcast in 1968, Please Sir! holds a firm place in the ranks of the greatest British sitcoms. David Barry – known to millions as mummy’s boy Frankie Abbott – was a fan favourite, appearing in all three series as well as the 1971 feature film and spin-off TV show The Fenn Street Gang. In this entertaining memoir, David tells the whole story, from his own audition all the way through to what the gang are doing today. He shares hilarious anecdotes and fond memories that for the first time give a behind-the-scenes look at what it was like to film the much-loved show.

PLEASE SIR!  THE FILM on DVD

Adapted from the TV series WITH OPTIONAL SUBTITLES

BOOK + DVD  TOGETHER FOR  JUST £20 with Free UK Postage 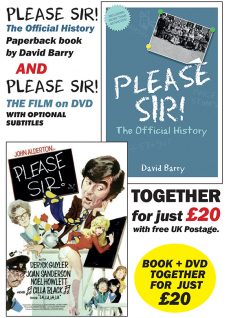