Reel to Real – A Life in Film by Noel Cronin

Category: Reel to Real – A Life in Film by Noel Cronin Hard Back Book

Reel to Real – A Life in Film by Noel Cronin

Noel Cronin’s autobiography, founder of Talking Pictures TV, is a must-read for those interested in British film history. He takes us from his schooldays in north London to a job as a post-boy at Rank, then as a film editor in Soho in the Swinging Sixties and Seventies, starting a film distribution company, to the ground-breaking Talking Pictures TV.

It shows the grit and determination necessary to make a living in the film business, and the leaps of faith one should take if you’ve got a good idea.

Noel talks in detail about the highs and lows of his career, and the huge fun he’s had along the way with family and colleagues, as well as the sadness of losing his beloved wife and a battle for his integrity and that of the firm he worked so hard to establish.

The book ends on a high note, with the triumphant launch of Talking Pictures TV, the greatest moment of his career, and is a template for anyone wanting to start up their own station almost single-handedly. It’s a warm and hugely entertaining romp through the golden years of British cinema, and an inspiration to anyone who chooses film to follow their dreams.

“Many, many films and a lot of our history would have disappeared if this gentleman had not cherished them” – JENNY HANLEY

“He started his life on the lowest rung of the ladder as an office boy in the movie business…he was hooked!” – MELVYN HAYES OBE 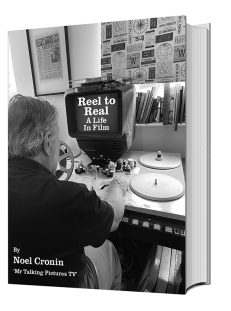