Originally broadcast in 1983, the series provided a notable early lead role for Sam Neill. This three DVD set contains all twelve episodes of the epic series. Based on a true story, Reilly Ace of Spies follows Russian-born Sidney Reilly, who became one of the greatest spies ever to work for the British. From the gentlemen’s clubs of Edwardian England to the forbidding gates of the Kremlin, Reilly played country against country with levels of skill and audacity that have rarely been seen since.

OUR PRICE £20 with FREE UK POSTAGE 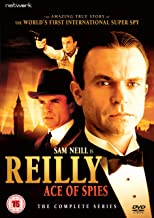