A working-class girl’s plans to marry are thwarted when her mother interferes. Hoping to improve her daughter’s social status, she arranges for her daughter to wed her boss while the fiancé is away at war. He arrives home to discover his love is engaged to another man. Who will she marry?

Four orphaned children are put in their Aunt and Uncle’s custody after their parents, renowned explorers, are lost. The ‘proper’ English aunt is the sister of the missing mother; the uncle, a Texas oilman, the brother of the father. Naturally, the disparate pair dislike each other at first… 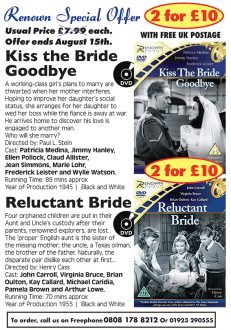