View cart “Renown Special Offer 4 films for £20” has been added to your cart.

As the evenings begin to draw in and a chill is felt in the air, why not treat yourself to a selection of films from Renown? The perfect way to spend an evening by the fire.
The four films on offer are enduring classics, to be watched again and again. They also make fantastic gifts!

The Broken Melody (1934) Director: Bernard Vorhaus. Cast: John Garrick, Margot Grahame, Merle Oberon, Austin Trevor. A struggling composer is supported by a woman who secretly loves him but after enjoying success he marries a famous actress. She is unfaithful and he kills her lover, is sent to Devil’s Island, and escapes. Realising he actually loves his benefactor, he writes a musical based on his life’s experiences – but can the story have a happy ending? Black & White. Running Time: 1hr 18mins approx.

I’ll Walk Beside You (1943) Director: Maclean Rogers. Cast: Richard Bird, Lesley Brook, Percy Marmont, Leslie Bradley, Sylvia Marriott, Hugh Miller, Beatrice Varley, Irene Handl.  A man and a woman intend to marry upon his return from combat but when he is reported missing in action, the woman becomes a nurse and falls for a doctor. The soldier is eventually found but he has amnesia. A romantic song helps to trigger his memory but will the two lovers reunite? Black and White. Running Time: 80 mins approx. 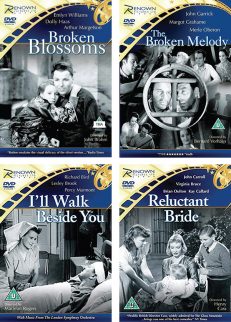