View cart “Renown Special Offer 6 films for £20” has been added to your cart.

Now the weather is cold and the nights are frosty, why not treat yourself to a selection of films from Renown?
The films on offer are enduring classics, to be watched again and again. They also make fantastic gifts!

Lilli Marlene (1950) Director: Arthur Crabtree.
Cast: Lisa Daniely, Stanley Baker, Hugh McDermott. The French girl whose song ‘Lilli Marlene’ is loved by Germans and allies alike, is captured by the Nazis and rescued by the British after being forced to broadcast the song for the Germans.
Black & White. Running Time: 1 hr 25 mins mins approx. 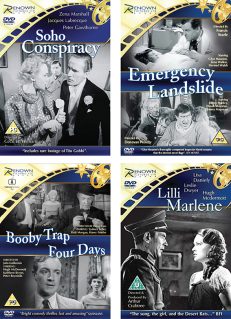