“I was born respectable, but I soon decided I wasn’t going to let that spoil my life.” – Mary Millington

Mary Millington was a pretty English girl-next-door who personified the word ‘glamour’. Her meteoric rise to the top was scandalous and controversial. She became the most famous pin-up of the decade and her racy reputation could shift a million newspapers and sell the longest-running British movie of all-time. Mary’s fame brought her a lavish lifestyle and an affair with a serving Prime Minister. Her sexuality was accessible and her personality addictive, but her sexual bravado hid a darker side. Persecuted by the authorities, Mary was tortured by self-doubt and she sadly died at the height of her fame in August 1979, aged 33. Filmed on location in London and at Pinewood Studios, Simon Sheridan’s documentary reveals the truth behind an icon.

Extras: Audio Commentary. Sam Dunn from the BFI discusses the making of Respectable with its writer/director/producer, Simon Sheridan.
Respectable teaser trailer plus 2015 teaser trailer for Respectable, originally released on what would have been Mary Millington’s 70th birthday.
Come Play with Me original 1977 trailer plus the British theatrical trailer for Come Play with Me, unseen for nearly 40 years.
Party Pieces 1974 Mary Millington film. A short film, once presumed lost, with a young Mary Millington. Originally released on 8mm without sound, it was digitally restored at Pinewood Studios.
Confessions from the David Sullivan Affair. Film producer David Sullivan chats about life with girlfriend Mary Millington, as well as exclusively revealing a self-portrait Mary gave him in 1977.
Keep It Up, Sue! In Conversation with Sue Longhurst. Mary Millington’s co-star Sue Longhurst talks about her career in saucy British sex comedies and recalls the making of Come Play with Me.
Sex Talk with Ed Tudor-Pole Former Sex Pistol Ed Tudor-Pole shares his views on pornography, Mary Whitehouse, the allure of 1970s’ Soho and what it was like working with Mary Millington on The Great Rock ‘n’ Roll Swindle. 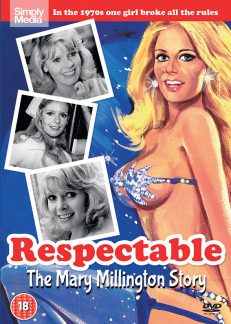