View cart “RITA, SUE AND BOB TOO DVD & Blu-Ray” has been added to your cart.

RITA, SUE AND BOB TOO

You will receive both DVD AND Blu-ray discs. WITH OPTIONAL SUBTITLES.

Following an acclaimed career in hard-hitting TV drama, director Alan Clarke achieved a cinema hit with this much-loved comedy. Bradford teenagers Rita and Sue regularly babysit for successful couple Bob and Michelle, whose comfortable suburban lifestyle contrasts with their own bleak existence. One evening when Bob is taking them home, he suggests a detour to the moors. Impressed by his flashy car and worldly ways the girls are smooth-talked into a three-way sexual relationship that becomes very much part of their lives. At first it’s a bit of a laugh but people are quick to point the finger and the affair is soon out in the open. The screenplay was adapted from plays by Andrea Dunbar, based on her own upbringing on Bradford’s Buttershaw estate. The contrast of bawdy laughs with social comment results in a memorable British film of the period. Locations in West Yorkshire included:Buttershaw, Bradford, local Moorland scenes and Haworth (a school trip to the Bronte Parsonage). 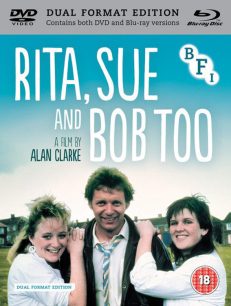