(Paperback Book)
A Rough Trade, Mojo and FT Book of the Year.

Emerging from the jazz clubs of the 1950s, skiffle caused a sensation among a generation of kids who had grown up during the dreary post-war years, teenagers were looking for a style of music of their own. Against a backdrop of Cold War politics, rock’n’roll riots and a newly assertive working-class youth, Billy Bragg charts – for the first time in depth – the history, impact and legacy of a movement that sparked a revolution and shaped pop culture. The golden generation of British rockers all started out in skiffle groups. Paul McCartney first saw John Lennon leading skiffle group the Quarrymen at a church fête in the summer of 1957. Skiffle’s leading light, Lonnie Donegan, was British but found a way of playing American. Van Morrison recalls, “People trying to copy Elvis had no chance… but Donegan made it possible to go through that door.”

“Roots, Radicals and Rockers … traces the grand sweep of an unfurling counter-culture, from its politics to its music. With an archivist’s sense of mission, a musician’s knowledge and a fan’s joy, Bragg performs a national service: illuminating a moment all too easily lost.” SUNDAY TIMES 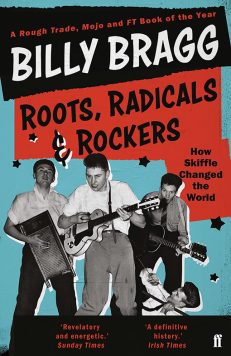