View cart “Joshua” has been added to your cart.

After a wagon train is attacked by Comanche Indians, a young Cherokee finds a lone survivor. He takes the baby girl to his parents, who name her Rose (Mala Powers), and rear her lovingly as one of their own.

Years later, Rose`s foster parents are murdered while trying to stop outlaws on the run from stealing their horses. A devastated Rose vows revenge. She tracks the killers to Dodge City, where she enlists the aid of Marshal Hollister (Jack Beutel), known as one of the best lawmen in the West.

Although the Marshal insists she abide by the white man`s law, Rose takes matters into her own handsâ€¦ 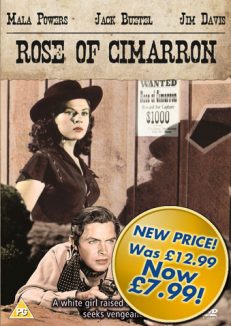 You're viewing: Rose Of Cimarron £7.99
Add to cart