There have been countless Roy Orbison compilations over the years, but all too often overdubbed or stereo versions are used, which possess neither the presence nor the bite of his original mono 45rpm versions. The best way to listen to Roy is to hear those original singles in glorious, pristine mono, sounding exactly as they did all those decades ago. This compilation presents his first seventeen singles, released between 1956-62, on Je-Wel, Sun, RCA Victor and Monument, with one omission; the first, non-hit version of ‘Ooby Dooby’. (His re-recording, which is included, was his first hit). Also included are his early million sellers Only The Lonely, Blue Angel, Runnin’ Scared, Cryin’, and Dream Baby.

This is an intriguing body of work, and it is interesting to compare his very early 45s with the ten peerless singles which he cut for Monument.

Roy Orbison began singing in a band at high school. He was contracted to Sun Records in 1956, but enjoyed his greatest success with Monument Records. From 1960 to 1966, 22 of his singles reached the Billboard Top 40, and he wrote or co-wrote almost all that entered the Top 10. In 1988, he co-founded the Traveling Wilburys with George Harrison, Bob Dylan, Tom Petty, and Jeff Lynne. Orbison died of a heart attack in December that year aged 52. His honours include inductions into the Rock and Roll Hall of Fame and Nashville Songwriters Hall of Fame, the Songwriters Hall of Fame and the Musicians Hall of Fame and Museum. Rolling Stone placed him at number 37 on their list of the Greatest Artists of All Time and number 13 on their list of the 100 Greatest Singers of All Time. 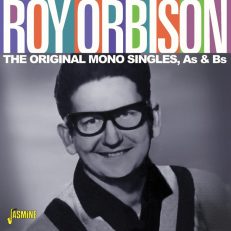