A seven film collection of rare and never before seen footage of the Royal Navy from a range of film archives, with rare colour footage shot by officers from the Nelson, the Kent, the Ivanhoe and the Laforey. Historian Roland R Smith creates a powerful film portrait of the Royal Navy in the early years of the Second World War, reviewing the fleet and recounting some of the earliest action.

Disc 2: PERILOUS WATERS AND THE HAZARDS OF RUSSIAN CONVOYS

Disparagingly referred to as the ‘forgotten fleets’, this is the ultimate film record of these two fleets, their fighting ships and men. Includes: The British Pacific and East Indies fleets, HMS Howe in Australia, The Pacific Fleet Strikes, Refuelling at Sea, The Fleet in colour, the King Inspects, Sydney and beyond.

Two of the largest, most spectacular and successful operations conducted by the Royal Navy during the Second World War. Includes The Great Armada: Operation Torch, Assault Convoys, Force ‘H’ Patrols, D-Day Reflections of ‘Operation Neptune’, Let the Landings Commence, The Supply Line, The Small Ships, a Visit from the King and Churchill visits the Beachhead.

One of the last battleships commissioned by the Royal Navy, it played a major role in the Second World War. Includes: Destroying the Bismarck, Churchill Aboard HMS Prince of Wales, Life Aboard HMS King George V and early March 1942.

A look at how the Royal Navy responded to war through training of new recruits, new tactics to protect convoys in the Channel and mine sweeping of the waters.  Includes: Excerpts from Silent Film, Gibraltar and the Coronation Review, The Orkneys, Aircraft Carriers of WWII, The Demands of the Destroyer, War Against the U-Boats, Training and Convoys and A Warm Welcome Home.

Disc 7: WAR IN THE FROZEN NORTH

The story of the carrier Glorious from 1935 to her sinking during the ill-fated Norwegian  Campaign of 1940. Includes HMS Glorious, HMS Repulse and HMS Renown, The Battle of North Cape and Recollections. 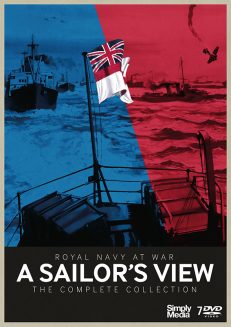