Renown Pictures presents the complete SALLY ANN series (all 8 episodes). Includes Optional Subtitles.
From the award winning writer Phil Redmond, the 1970s drama series – made by Southern Television in 1979 and set around the daily lives of a Salvation Army group – for the first time on DVD and with optional subtitles available! The original press sheet in 1979 states: Major Gibbs (Frank Mills) and his wife Mrs Major Gibbs (Stephanie Cole) work at the Citadel. Their two teenage children Hannah (Julia Chambers) and Bramwell (Philip DaCosta) have come to terms with growing up in the Salvation Army.

Phil Redmond, went on to write for ‘Doctors,’ ‘Grange Hill’’ and ‘The Bass Player and the Blonde.’ Phil went on to create a lot more after 1979! Including ‘Hollyoaks’ and ‘Brookside’ which he later became famous for. He provides some of the scripts along with Peter Terson (the author of ‘Zigger Zagger’); Anne Valery (‘Angels’ and ‘Emmerdale’) and Tony Hoare (‘Hazell’), but all refined their talents on this series, for Southern TV. The hostel is run by Major Cartwright (Gerald James) who has a strong willed and determined assistant in Lieutenant Mary Barker (Carol Leader), and an amiable receptionist, the ex-convict Pike (Sam Kydd).

The series was produced and directed by Tristan De Vere Cole and originally broadcast on Sundays at 6pm from 28-Oct to 16-Dec 1979. (It was originally due to air from 12-Sept, but industrial action at ITV forced the series to be rescheduled.

Sally Ann lasted for one series of eight episodes. 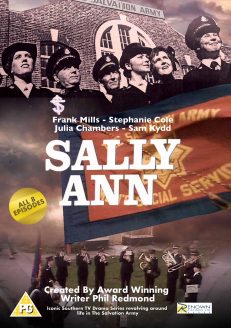 You're viewing: Sally Ann The Complete Series £20.00
Add to cart