BE A GOOD BOY, SAM

Sam’s son Jonathan found an unpublished autobiography and writings, diaries and scripts in his mother’s loft when clearing out the family home after her death in 2012. He has compiled and edited four volumes from this archive. Sam wrote with humour and great observation about a time when TV was rarely recorded and film was in black and white, about a career crammed with incident and humour. It’s an amusing and intimate chronicle of a phenomenally prolific life in entertainment.

The first volume of much-loved actor Sam Kydd’s memoirs, this book follows his career from 1945-52, when he first started acting, having just returned from being a POW in Poland, which he wrote about in ‘For You the War is Over,’ in 1974. During this period, despite his mother almost persuading him to get a ‘proper job with a pension’, he was in 119 films.

Sam was a fixture in the nation’s living rooms from the 50’s to the 80’s. He was so well known that a “Spot Sam Kydd” game was played by families whenever a black and white film, such as I’m Alright Jack, Angels One Five, or Appointment in London, was shown on TV – a game that Talking Pictures TV viewers continue to play today. He gravitated from small parts to big roles, mostly on TV, where he starred in plays, sitcoms and series. He was at home in both comedy and straight drama, known for playing Irishmen and Cockneys, in hit TV series like Pickwick Papers, Crane, Orlando, Mess Mates, The Fossett Saga and Dixon of Dock Green, (in which he played over 14 different characters), all at a time when to be in a successful TV show meant being seen by over twenty million people a week. He worked with Benny Hill, Terry-Thomas, Arthur Askey, Harry Worth, Eric Sykes, Charlie Drake, Frankie Howerd and Jimmy Edwards and played Frankie Baldwin in Coronation Street until his death in 1982. 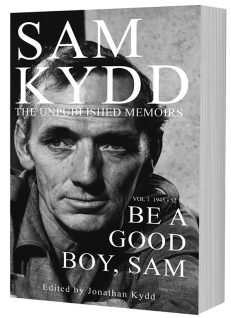 You're viewing: SAM KYDD: THE UNPUBLISHED MEMOIRS £17.99
Add to cart