For the first time ever on DVD, fully restored with optional subtitles.

THE WESTERNER is one of the most sophisticated western series for its time – or any other. Starring Brian Keith as amiable, unexceptional cowhand/drifter Dave Blassingame who travels with a dog called Brown, played by Spike, best known for his performance as Old Yeller (1957) and who also appeared in Lassie. John Dehner also features as rakish con man, Burgundy Smith.

The main character, Dave, is a drifter, in between jobs he mostly squanders his money in saloons. As he drifts, he stumbles into conflicts, many of which pose ethical and moral dilemmas. Some episodes are comedic, others much more serious. Peckinpah acted as producer of the series, with a hand in the writing of each episode and directing many of them. Critically praised, the show ran for only 13 episodes before cancellation, mainly due to its gritty content. The episodes ‘Jeff’ and ‘Hand on the Gun’ are extraordinary in their imaginative directing and forerunners of his later feature films. The Westerner and Peckinpah were both nominated by the Producers Guild of America for Best Filmed Series and The Westerner has
since achieved cult status.

Peckinpah also directed two hour-long episodes for The Dick Powell Theatre including ‘The Losers’, a remake of The Westerner with Lee Marvin. He mixed slow motion, fast motion and stills together to capture violence, a technique famously put to more sophisticated use in The Wild Bunch. 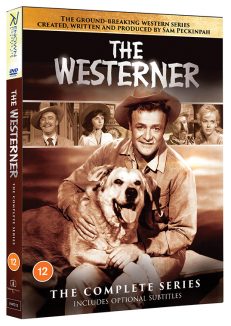 You're viewing: Sam Peckinpah’s The Westerner Series on DVD £15.00
Add to cart