AVAILABLE ON DVD FOR THE FIRST TIME

The Phantom Empire is an American Western serial film directed by Otto Brower and B. Reeves Eason in 1935. It starred Gene Autry, Frankie Darro and Betsy King Ross. Made in 12 chapters, the serial combines Western, musical and fantasy elements. It was Gene Autry’s first starring role, playing himself as a singing cowboy.

Gene Autry runs Radio Ranch, a real ranch from which he makes a daily live radio broadcast. His sidekicks are brother and sister, Frankie Baxter and Betsy Baxter, who lead a club, the Junior Thunder Riders, in which kids play at being knights who make a sound like thunder when they ride. Betsy, Frankie and Gene are kidnapped by real Thunder Riders from the underground empire of Murania, situated deep below the ranch. The technologically advanced culture features towering buildings, robots, ray-guns, futuristic television and elevator tubes that extend miles below the surface. It is ruled by the icy, blonde, evil Queen Tika. Meanwhile, a group of criminals plan to invade Murania; while revolutionaries in Murania plot to overthrow Queen Tika.

The series is full of sci-fi gadgetry, Western scenery, songs, and fast action. Whatever happens during an episode, Gene Autry must get back to the ranch to deliver his daily musical broadcast. Filmed on location in California at Agoura Ranch, Bronson Canyon, Griffith Observatory, Los Angeles, Iverson Ranch and at Keystone Studios.

Gene Autry was a pioneering figure in country music. A singer, songwriter, musician, actor, rodeo performer and baseball team owner, he sang on the radio, in films, and on television for over three decades. A member of both the Country Music Hall of Fame and the Nashville Songwriters Hall of Fame, he is the only person to be awarded stars on the Hollywood Walk of Fame, for film, television, music, radio and live performance. 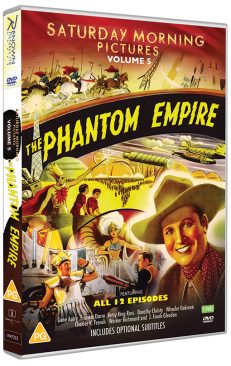