Radar Men from the Moon

Running Time: 169 mins. All 12 episodes of the classic Sci-Fi series.

Radar Men from the Moon is a 1952 black-and-white 12 chapter movie series, the first to feature Commando Cody, starring George Wallace as Cody, Aline Towne as his sidekick Joan Gilbert and series veteran Roy Barcroft as the evil Retik, the Ruler of the Moon. Also starring Clayton Moore. Directed by Fred C. Brannon. Written by Ronald Davidson with special effects by the Lydecker brothers.

Episode 1: Moon Rocket Mysterious explosions are happening, and the government believe it is an atomic ray on the moon. Commando Cody is sent to investigate.

Episode 3: Bridge of Death Trapped in a cave with molten rock flowing in, Commando Cody and Ted have to leave the ray gun to escape and return to Earth.

Episode 5: Murder Car Retik’s earth agents fail in their ransom attempt and a robbery, but they capture an enemy agent.

Episode 6: Hills of Death Cody narrowly escapes death when a stolen ambulance is aimed at the car he is driving. An atomic bomb causes a massive landslide.

Episode 7: Camouflaged Destruction  Cody is knocked off a cliff. Retik has his largest ray gun ready and plans to attack earth’s defences once again.

Episode 8: The Enemy Planet The plane Cody is in is blasted out of the sky. Will earth’s plans for a fact-finding trip to the moon be thwarted?

Episode 9: Battle in the Stratosphere  Commando Cody fights off the radar men and escapes back to Earth with the ray gun fuel and a prisoner.

Episode 10: Mass Execution Can Cody escape the rock fall? Retik orders the death of Cody and his team. Retik decides to journey to Earth.

Episode 11: Planned Pursuit Will Cody survive the gas attack? The secret hideout of the enemy earth agents MUST be found.

Episode 12: Death of the Moon Man Cody avoids being fried but can he stop Retik’s enemy agents who plan to conquer earth? 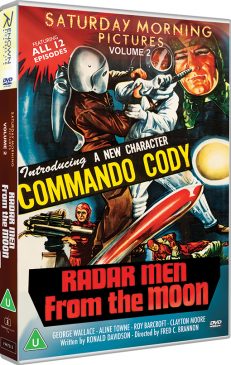