The Go Between • Billy Liar • Far From the Madding Crowd • Darling

Julie Christie is one of the most luminous actresses to grace the British screen, as well as screens worldwide. She is famously known for her magnetism on film, which has by no means faded with time. This box set contains some of the films that helped to carve her career as one of the best known actresses of her time.

The Go-Between (1971), was adapted by Harold Pinter  from the novel written by L.P Hartley. Christie starred with Alan Bates. Directed by Joseph Losey, the film won the Grand Prix at the 1971 Cannes Film Festival and achieved unaniminous critical acclaim, was seen by many as the peak of the careers of the actors involved. It remains a beautiful and atmospheric interpretation of a truly poignant story about a secret love affair between a beautiful heiress and a poor tenant farmer, who can only communicate by sending messages via a young boy.
Cast: Julie Christie, Edward Fox, Alan Bates, Margaret Leighton, Michael Redgrave, Dominic Guard, Michael Gough, Richard Gibson, Amaryllis Garnett, Simon Hume-Kendall, Roger Lloyd-Pack.

Julie Christie’s smile is her trademark expression: radiant and serene suggesting empathy with whoever it’s aimed at. A brave face, smiling in spite of adversity in a slightly more upbeat version of the British stiff upper lip. She remains a vivid image of the independent woman who is, as Frederic Raphael noted, “contemptuous of convention and wary of commitments.” 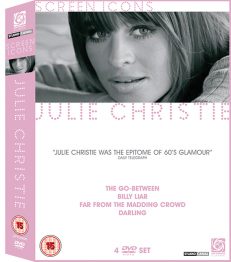