Just £20 for both with free UK Postage.

We celebrate SOPHIA LOREN, one of the last stars from the Golden Age of Hollywood and the only living person on the American Film Institute’s list of the 50 Greatest Screen Legends. We present a DVD of Brief Encounter, in which she starred with Richard Burton, plus a CD of her musical recordings.

In the early 50s, Sophia Loren recorded novelty records which were huge hits in Italy, as well as film music,  including: S’Agapò from Boy on a Dolphin; Almost in Your Arms and Bing! Bang! Bong! from Houseboat; Carina from It Started in Naples and Goodness Gracious Me from The Millionairess. All are included here.

Previously filmed by David Lean in 1945, this adaptation of Noël Coward’s story about a chance meeting that leads to forbidden love portrays the undeniable chemistry between the would-be lovers. The film was shot on location in Hampshire and the New Forest during a glorious English summer, providing the perfect backdrop for this elegantly passionate story. 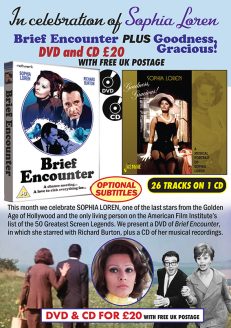