Special Offer: Carry on Regardless Book PLUS Anita Harris CD

Special Offer: Carry on Regardless Book
PLUS Anita Harris CD

POSTCARD AVAILABLE ON FIRST 50 ORDERS ONLY

CARRY ON REGARDLESS by Caroline Frost

Getting to the Bottom of Britain’s Favourite Comedy Films
Hardback Book, 232 pages with 32 black & white illustrations.

Following the series from 1950s, through to the golden age of the 1960s and the later years. Sid James’ chuckle, Kenneth Williams’ vowels, Charles Hawtrey’s bespectacled bashfulness and Barbara Windsor’s naughty wiggle! The talent and hard work that went into creating the laughs – and the real-life struggles of the stars who found solace in companionship at Pinewood Studios.

FEATURES THE TRACKS: IN MY LIFE and ROCKIN’ GOOD WAY with Peter Gill
BONUS TRACK: BABY IT’S COLD OUTSIDE

With a career spanning from 1961 to today, Anita Harris is well-known for both her singing and acting talents, having appeared in two Carry On films, among others, as well as on TV. She has recently wowed audiences at our Renown Film Festivals, receiving standing ovations and proving that she has definitely still got it! We are delighted to offer this CD with two exclusive songs recorded by her, with the Carry On book on the opposite page and a signed postcard.
POSTCARD AVAILABLE ON FIRST 50 ORDERS ONLY. 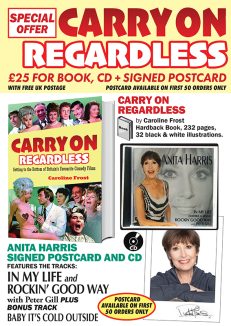 You're viewing: Special Offer: Carry on Regardless Book PLUS Anita Harris CD £25.00
Add to cart