Were you a child of the 50s? Relive those nostalgic memories with our deal!

Lancashire born, diminutive star Jimmy Clitheroe was the perpetual schoolboy whose northern humour entertained a generation of British audiences. The four-foot, three-inch tall mischievous comic was popular in every medium from theatre to film and records, with The Clitheroe Kid, one of Britain’s longest-running radio sitcoms, drawing a peak audience of 10 million with numerous catchphrases, including: “Don’t some mothers ‘ave  ’em!” and “I’m all there with me cough drops”. He made films with Arthur Lucan, George Formby, Jewel & Warriss, Burl Ives, Frank Randle and Terry-Thomas. In 1963 Clitheroe arrived on television, in That’s My Boy, with Deryck Guyler. All seven episodes are included here, plus the last remaining episode of Just Jimmy, which also starred Mollie Sugden.

Spangles, Tiddlywinks and The Clitheroe Kid

Recalling what it was like to be a child in the 1950s.

Children in the 1950s made their own entertainment: they built dens, played conkers and go-karts, climbed trees and re-enacted fights from the latest cinema blockbuster. Food was, for many years, still rationed and bought from the local corner shop. Families gathered around the radio to hear the latest dramatisations, such as the popular show Dan Dare, sponsored by Horlicks, first broadcast in 1951. A trip to the cinema included a Pathé News reel, cartoons and a double bill featuring the latest movies. This book shows what life was once like for the children of the 1950s, at home, at school, in music and fashion. 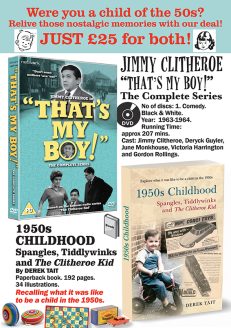