GRACIE FIELDS SPECIAL OFFER! 2 DVDs:
Sally in Our Alley/This Week of Grace
PLUS a free necklace with Gracie Fields’
autograph for just £20! with free UK Postage

Beloved by the British public for her hit pre-war films, Gracie Fields’ Lancashire earthiness, humour & songs endeared her to generations of fans.

Sally in Our Alley (1931)
WITH OPTIONAL SUBTITLES

Beloved by the British public for her hit pre-war films, Gracie Fields’ Lancashire earthiness, humour and memorable songs endeared her to generations of fans. Her screen debut, Sally in Our Alley stars Gracie in a bittersweet wartime romance. A British soldier goes off to fight in the First World War, with his girlfriend waiting and worried at home. Wounded in battle and crippled, he decides that she would be better off believing that he is dead so she can get on with her life. Several years later she is still grieving for him, but he has been cured and goes looking for her.

A poor, unemployed woman is made housekeeper at the estate of a wealthy duchess, where she falls in love with the Duchess’ nephew and eventually marries him. However, she wrongly believes him to have married her under the impression that she is rich, so she leaves and takes a job on the stage working in the chorus line. The film features songs written by Harry Parr-Davies, including My Lucky Dayand Happy Ending. Once thought lost, the film promoted equality between classes, a theme which was a cornerstone of her work during her years of mainstream popularity.

Also includes: She Shall Have Music (1935) British musical comedy film directed by Leslie S. Hiscott and stars: Jack Hylton, (with his orchestra), June Clyde, Claude Dampier, Gwen Farrar, Marjorie Brooks and Felix Aylmer. A priceless record of one of the greatest ever British dance bands, the Jack Hylton Orchestra. 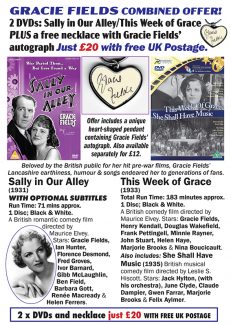