Spike Milligan was already well known for his hilarious radio programme The Goon Show, when his anarchic and surreal comedy sketch show Q5 was first shown on BBC Two in March 1969. It was considered by many to be one of the landmarks in British comedy, seen as a forerunner to Monty Python’s Flying Circus, which debuted a few months later. John Cleese later said: “when we first saw Q5 we were very depressed because we thought it was what we wanted to do and Milligan was doing it brilliantly.” Terry Jones, Michael Palin and Terry Gilliam all concurred, with Jones noting that “watching Q5, we almost felt as if our guns had been Spiked! We had been writing sketches for three years and they always had a beginning, a middle and a tag line. Suddenly, watching
Spike Milligan, we realised that they didn’t have to be like that.” Q gave centre stage to Milligan’s freeform surreal wit. The sketches came thick and fast, running into one another, making outrageous leaps from one subject or location to another and often stopping with no apparent conclusion. The Python team admit it gave them carte blanche to be silly in their own shows, but their TV days were over by the time Spike was offered a second series, Q6, in 1975. Qs 7,
8 and 9 followed over the next five years.

“Terry Jones and I adored the Q shows… [Milligan] was the first writer to play with the conventions of television.” Michael Palin

This 5-disc set collects all the surviving shows together for the first time. Four episodes of Q5 were wiped. Three remain and the show changed the face of TV comedy forever, inspiring new generations of ‘alternative’ talent, from Kenny Everett’s shows to Not the Nine O’Clock News to Vic Reeves and Bob Mortimer. Spike was joined by John Bluthal, Peter Jones, David Lodge, Bob Todd, Chris Langham, John Rappaport and Julia Breck; and in the early shows by Richard Ingrams, John Wells and Fanny Carby. Shambolic sets and rough-and-ready wardrobes set the scene for comedy mayhem, and sketches and gags stop abruptly, overlap or repeat for maximum confusion. A comedy Hitler is a frequent presence, world leaders of the day are mocked; and madcap skits include an interview with the Queen’s chicken, a grandmother-hurling contest and Jehovah’s burglars.

He often used the whole studio in the show, not just the sets, sometimes involving a mesmerised audience. The irreverent scripts are so funny that at times both Milligan and his cast members can be seen trying not to laugh. Sketches such as ‘The Irish Olympics’ out-Python the Pythons; and his news sketches rival the newsdesk pieces on The Two Ronnies, for whom he also wrote. The traffic wardens with Hitler moustaches are hilarious as is the man trapped inside an elephant at a zoo. The keeper is more interested in whether he paid his entrance fee than how he got there! Milligan dressed as Marlene Dietriech made it difficult for both him and Peter Jones to keep straight faces. In another sketch in a doctor’s waiting room, the patients include a man with his severed arm in the mouth of a dog and a woman with a tree growing out of her head. They sit quietly, just like normal patients, while the skit continues in front of them.
The world Milligan creates is a surreal version of the world as he knew it; it wasn’t true reality, so couldn’t be offensive. It may not always have been strictly ‘PC’, but it is priceless humour. If you need something to enliven the dark days of winter, this is it!

“The fact that Spike had gone there probably enabled us to go a little bit further than we would otherwise have gone.” John Cleese 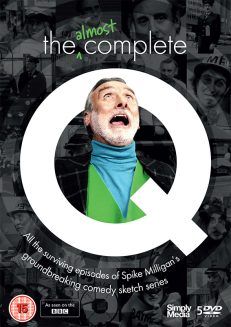