We are delighted to announce that tickets for our 9th Festival of Film 2022,
are now on sale. Ticket price £25

Tickets will be issued later this year.

Welcome to our 9th Festival of Film! Spend a whole day celebrating British Film & TV History with the nation’s favourite TV channel, Talking Pictures TV. Celebrity hosts and guests will be on stage, with films, shorts and newsreels from the 1930s to the 1970s. Plus films and stalls selling film memorabilia, special book signings & DVDs!

FULL GUEST LINE-UP AND SCREENING PROGRAMME TO BE ANNOUNCED 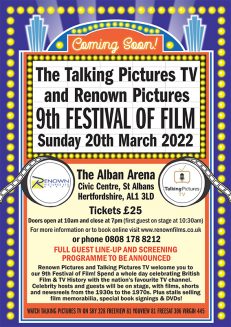