Renown Pictures are delighted to announce another festival of film for 2020, at The Stockport Plaza On Sunday 4th October 2020 11AM to 7PM.
A whole day celebrating British Film & Television History from the 1930s to the 1970s, set within a beautiful and iconic cinema. With celebrity hosts and guests on stage, news reels, films, a variety of stalls and, of course, the organist!
FULL GUEST LINE-UP AND SCREENING PROGRAMME TO BE ANNOUNCED.

If you’re at a loose end before the film festival OR you just want to join us for a friendly quiz, come along and test your film and TV knowledge and enjoy a chat with like-minded people. Join us for an afternoon or evening of fun, film and prizes with afternoon tea or dinner – or why not stay for both? (It’s a different quiz each time.)

This years festival tickets will be allocated, numbered seating. Please see the seating plan as a guide.
Tickets will be on a first come first served basis and will be sold from the front row backwards.
If you have a specific seating requirement, then please call us on our freephone number 0808 178 8212 as you will not be able to select seating when ordering on-line.

You will see from the seating plan that although your ticket numbers may not be numbered consecutively you will be seated together.

TICKETS ARE NON-REFUNDABLE AND NON-TRANSFERABLE

Some testimonials from last years event:

Two things struck us as we arrived at the Festival; firstly the sight of the beautifully restored Art Deco period Plaza Cinema, and secondly the sign saying, “Sold Out.” Rita Tushingham and Robert Ross hosted the event, which started with songs from the lovely Lola Lamour.

Veteran singing star Terry Dene (star of ‘The Golden Disc’) is still hitting the rock’n’roll groove in his 80s. He discussed his career in an interview followed by a Q&A session. It was quite a coup for TPTV to get the wonderful Stephanie Beacham on stage and she delivered a fun and interesting interview. Stars of ‘The Knack,’ Rita Tushingham and Ray Brooks, were reunited on stage and both gave some great insights into the industry at that time.

Films screened included rare newsreel appearances by top TPTV stars. It was fun to spot the actors in their younger days in the wartime short ‘We Serve’, which acted as a taster for the Imperial War Museum Season on TPTV. It was good to feel the warmth of audience appreciation for TPTV during a joint interview with Noel and Sarah, discussing the channel’s continuing rise in popularity.

We were treated to a wonderful performance from the Plaza’s original Compton organ, which brought back memories of the era of cinema-going.

It was a treat to go to the signing area, meet the stars and get their autographs. There were also many interesting film-related stalls – including young Archie on the Renown stand – adding to a successful and enjoyable event. It flew by and all too soon it was time to make our way home…but at least there’s more to come next Spring!

Linda Robinson writes: “I would like to say, how much we enjoyed the TPTV festival in Stockport… Stephanie Beacham interviewed by Jenny Hanley told funny stories about Marlon Brando being protective, in a scene where she was naked, he turned up in baggy wide pants and boots. Joan Collins insisted on calling her Sybil instead of Sable in ‘Dynasty’ rehearsals, ‘no one is called Sable’, she said. Barbara Stanwyck told her never to wear long earrings and Linda Evans shuffled about in slippers. Oliver Reed was also very gallant towards her and she mentioned working with William Roach on Coronation Street and how they supported each other in a time of distress.

Ray Brooks was very funny and laid back, as if he was chatting with friends. He couldn’t remember all the films he was in, as he said, he was so busy earning a living. Once he had to carry Dirk Bogarde, but dropped him, as he was quite heavy. Dirk wasn’t happy! He also told a story about Michael Crawford who he threatened to kill after one too many takes – tongue in cheek, of course! Rita Tushingham described working at the Everyman
Theatre in Liverpool when she was young and how she got her first film role.

We enjoyed the Cronin family interview and hearing how TPTV came about. Noel and Sarah really do care about people. The channel is a saviour for
millions of us, some living alone, others in poor health, some suffering
bereavement. Another little star is Archie Cronin, only 10, yet so mature and polite, he worked hard entertaining us.

A lovely young lady had us singing along to Doris Day and Carmen Miranda songs. The day went so fast and it was a truly feel good day, that we thoroughly enjoyed. The Plaza is a wonderful building, management and staff were sweet and helpful. The stalls were all very interesting. Thank you to all at Renown and TPTV for the joy you give me.”

“What a triumph for all concerned! I do hope you will be doing another one in Stockport next year”… 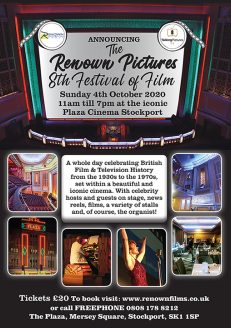