SUBURBAN STEPS TO ROCKLAND The Story of The Ealing Club

SUBURBAN STEPS TO ROCKLAND
The Story of The Ealing Club

Suburban Steps to Rockland is a feature-film documentary on the story of the Ealing Club, a venue that Mojo Magazine labelled: ‘The Cradle of British Rock,’ thanks to its role in creating a new musical movement. The venue witnessed the birth of The Rolling Stones, launched The Who and many others.

Cast aside by most of the Central London promoters due to the loud volume of their music, guitarist Alexis Korner and harmonica player Cyril Davies searched for a London venue that would accept their sound. In West London, they bumped into Fery Asgari, who was the events manager of a dingy concrete-floored basement bar used by local students. The first Ealing Club gig took place on March 17th 1962. The Ealing Club is now considered Britain’s first rhythm & blues club, the very first London venue where electric blues were played regularly. The Rolling Stones formed in April 1962 when Brian Jones met Mick Jagger and Keith Richards at the club. They played as resident band from July 1962 to March 1963. The Who, local boys from Acton, played regularly at the Ealing Club between November 1964 and March 1965. Musicians who performed at the Ealing Club include: Ginger Baker and Jack Bruce (Cream); John Mayall; Eric Burdon (The Animals); Nick Simper (Deep Purple); Paul Jones and Tom McGuinness (Manfred Mann); Mitch Mitchell (The Jimi Hendrix Experience). Cream bassist and singer Jack Bruce appears in one of his last interviews and there’s a memorable contribution from his bandmate Ginger Baker. Eric Burdon of The Animals also features; as does R&B great Geno Washington. Pete Townshend of The Who is filmed discussing the club in front of an audience and Paul Jones of Manfred Mann explains how he and other budding singers, including Mick Jagger, gathered in front of the stage, hoping to be called up by Alexis Korner. The film explores a moment in the lives of young people who, during the post-war years, were going out and enjoying themselves in ways their parents would never have imagined. 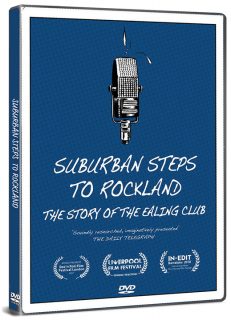 You're viewing: SUBURBAN STEPS TO ROCKLAND The Story of The Ealing Club £15.00
Read more