Debuting on ITV’s opening weekend in 1955, Sunday Night at the London Palladium swiftly established itself as one of the weekly televisual highlights and was one of the core shows that helped establish commercial television in the UK, transcending class, denomination and age group an unquestionable success which still provides a high benchmark that today s variety shows can only aspire to.

Special Features
[] The Norman Wisdom and Bruce Forsyth two-hander show, a previously unseen edition from 1974 and an incomplete show from 1961
[] Extensive image galleries featuring pictures of performers from shows that no longer exist, plus numerous behind-the-scenes images. 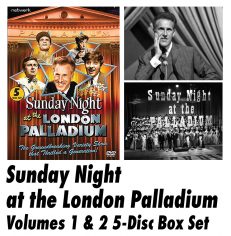 You're viewing: Sunday Night At The London Palladium Volume 1&2 £20.00
Add to cart