Written and directed by Bernard Miles and Charles Saunders.

This beautiful British film was made in rural England during WWII as a show of defiance against those who threatened the English way of life! Jimmy Bancroft, (Niall MacGinnis), is a fighter pilot convalescing in an English village from injuries sustained during the Battle of Britain. With his nurse Hazel Broome (Rosamund John) he spends summer days lazing in the Cotswold meadows where they discover a pair of nesting Pipits. Hazel’s ornithologist uncle confirms that the birds are indeed Tawny Pipits, but word spreads around the egg-collecting community that there is a rare nest in this rural English village. Afraid of having the bird’s eggs stolen or destroyed, the villagers agree to defend the nest against egg thieves, the army and the Ministry of Agriculture! 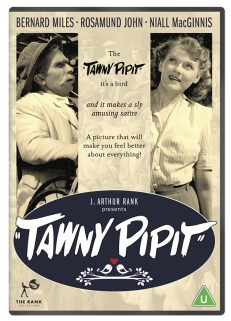