Renown Pictures are delighted to present TELL ME ANOTHER SERIES 1 & 2, the iconic hit TV show made from 1976 – 79. For the very first time on any format this fabulous 2-DVD Box Set brings together the first two series for your enjoyment.

In Series 1, laugh and sigh as the stars recall with their own brand of humour and personal magic, the many funny, touching and heartfelt incidents that have happened to them on their way to success. Hear about friends, enemies, idols, girlfriends, landladies, audiences and wives in stories which form a rich tapestry of “life behind the scenes” of show business.
Series 1 is directed by Anthony Howard.

In Series 2, the stars have a chance to tell stories about some of the strange incidents that have befallen them – stories of wit and wisdom with perhaps a touch of poetic license! Among the stranger tales are those involving Warren Mitchell, a fairy wand and a pair of football boots and Marti Caine and hundreds of lavender bags. Why was Reg Varney stuck in a trap door? Why did George Melly’s Uncle recite the Hunting of the Snark in a tar bath? And how did Spike Milligan fall through a ceiling?
Series 2 is directed by John Coxall.

Many of the anecdotes are hilarious, but some are genuinely moving, giving a glimpse of the real personality behind a famous show business face in 450 minutes of pure entertainment.
This wonderful 2 DVD collection brings you all 18 episodes from the first two series of this landmark entertainment show from the Southern Television archive.
The perfect gift for fans of television nostalgia, comedy and entertainment. Grab yourself a copy now and re-live the laughs with some of the true legends of stage, screen and TV.

£20 with FREE UK POSTAGE AND PACKING. 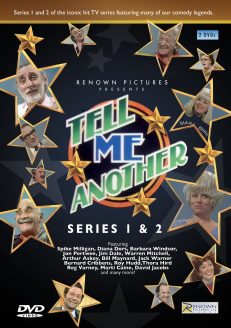