View cart “THE BROTHERS The Complete Series 1 DVD Box Set” has been added to your cart.

Special Features:
Inside The Omega Factor
A documentary examining the making of the series and the controversy it caused.
Also included: Powers of Darkness audio commentary • Photo gallery.

The Omega Factor was an inspirational, mysterious and controversial 1970s science fiction series. Journalist Tom Crane discovers he possesses remarkable psychic powers. He is recruited to join parapsychologists Roy Martindale and Anne Reynolds in Department 7, a top-secret government agency assigned to investigate strange and supernatural phenomenon and the untapped potential of the human mind. Crane joins the team hoping it will help him find and get revenge on the man responsible for the death of his wife, the powerful rogue psychic Edward Drexil. Together, Department 7 aims to bring down the mysterious organisation Omega, which seeks to use mind control powers to take over the world. On their way they will undertake dangerous missions that take them beyond the realms of science into a twilight world of terrifying paranormal activity. The Omega Factor was set in Edinburgh and aired in 1979 on BBC Scotland, and has since been lauded as the show which inspired iconic Sci-Fi thrillers such as The X-Files.

The series was created by Jack Gerson, one of Scotland’s finest television script writers, who worked on series such as Z Cars, Sutherland’s Law and Scotland’s first TV soap, High Living. The Omega Factor co-starred Louise Jameson, who played Leela in Doctor Who from 1977 to 1978; and James Hazeldine, a British television, stage and film actor and director, perhaps best known for playing firefighter Mike “Bayleaf” Wilson in the LWT drama London’s Burning. The mega Factor explored extra-sensory perception, hypnosis, brainwashing, telekinesis, poltergeists, out-of-body experiences and spiritual possession. It could be very shocking and was considered violent for the time. It was attacked by Mary Whitehouse, which created publicity, but ultimately resulted in the end of the series, never to be repeated on television. 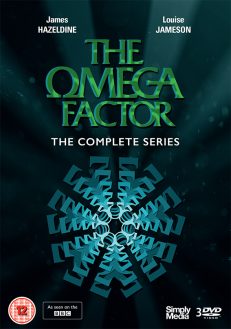